At Smartvid.io, one of the things we’re always emphasizing with customers is the importance of building a safety culture. It makes a huge difference, and you don’t have to just take our word for it. A study in the academic journal, Safety Science, found that safety measures are significantly more effective when they’re implemented within organizations that already have a strong safety culture.

Suffolk Construction provides a great example of the power of a strong safety culture and how a well designed program can further strengthen it. Within just 12 months, the construction giant not only reduced recordable incidents by 28%, but it also cut lost time by 35%. They didn’t accomplish these reductions through their safety culture alone, though. Suffolk built on that culture with a bold national safety program of their design, which they called RiskX.

How bold? When any of its more than 2,400 employees entered a job site, they were required to submit safety observations, either positive or negative, via a tablet or smartphone. And thanks to Suffolk’s already strong safety culture, its people immediately got with the program, with more than 1,000 people sending thousands of safety observations each week from more than 500 projects in 11 different regions.

Collecting observational data is the first step towards enabling Predictive-Based Safety. You can learn a lot more about the concept in the article behind the link, but, in a nutshell, Predictive-Based Safety harnesses the power of analytics and artificial intelligence (AI) to identify risks and determine which jobs have the highest chance of an incident so management can take action before an incident occurs. 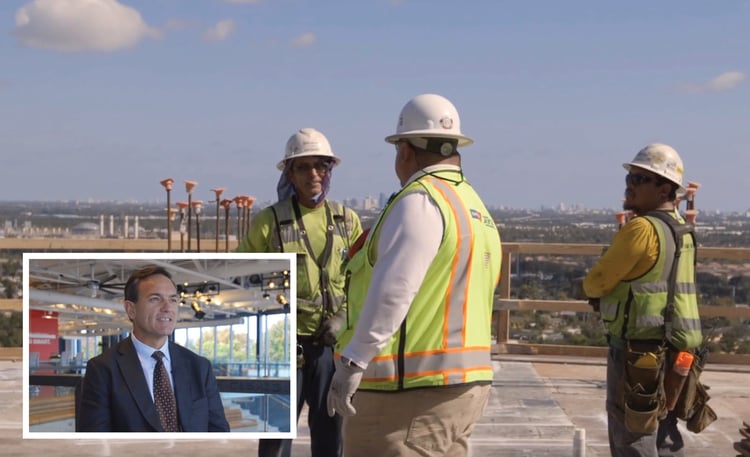 Alex Hall, EVP of Environmental Health and Safety at Suffolk, explains how Suffolk manages safety through its RiskX program

Smartvid.io’s AI platform, Vinnie, along with its Safety Observations module provides Suffolk with technology for both reporting and analysis within RiskX. Rollout was simple — the company was able to deploy Smartvid.io to more than 1,000 users in just two weeks. Plus, Smartvid.io integrates easily with all major construction management platforms, including Procore, which is what Suffolk uses. Trade partners and users were automatically pulled from Procore into Smartvid.io, and whenever a new project is created in Procore, an identical one is also created in Smartvid.io. Smartvid.io was also able to pull all observations made prior to deploying Smartvid.io, so nothing was lost.

A critical goal of Suffolk’s RiskX program was to incentivize good safety practice and not just to find mistakes. As Mike Moore, General Superintendent, West Region for Suffolk, said, “We didn’t want to just be pointing out errors, because we wanted to put the focus back on rewarding good behaviors. It’s been really well documented that incentive programs cause others to seek that kind of reward.”

So, in Suffolk’s program, when people see good safety in practice, they can report a “great catch” to recognize behavior that’s worth recognizing. When they do report a risk, they must assign it severity and frequency scores, and, if the combined score is high enough, it will trigger alerts so the risk can be immediately addressed.

But the platform does much more than send alerts about high-risk observations. Vinnie crunches the numbers to determine which projects are at greatest risk based on the image data collected across projects. Smartvid.io also makes the results available from their PowerBI dashboards via a data warehouse API.

“RiskX is an integral part of our day-to-day safety process,” Moore said. “It tells you how healthy your project is, meaning how safe it is. I look to see that the team is making observations, that I’m making proper observations. We review the data at the end of the day, we look for trends, and we make that any corrective actions that have to be taken are completed. It’s an incredible tool. It simply makes you a better superintendent.”